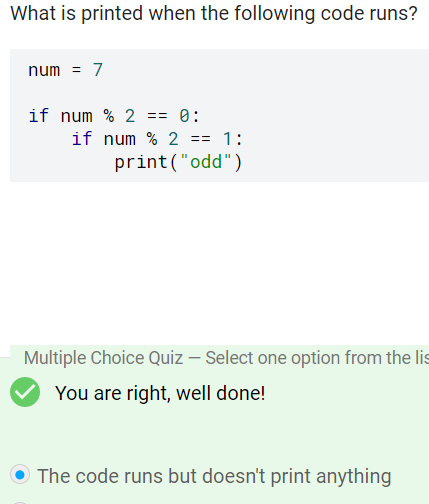 I am trying to understand why the last question in 4.2 “the code runs but doesn’t print anything”, can anyone please explain why?

Thank you, I think i understand. (Although I think you had a typo in your parenthesis?)

What I am understanding is that is you have a nested if-statement, if the first one is false, then the program ends right there

What would you need to do to the program in order for it to actually print (“odd”)…? What are some variations that I can try in repl, because I’m trying a few different things but none seem to work

Because the condition in the 1st (“outer”) if statement is false, the block inside it won’t execute. So, the 2nd if statement won’t even be evaluated.

To fix it, you will want to remove the 1st if statement completely and then decrease the indent on the “inner” if and its code block (the print statement).